* If you have any alumni news or if you are a Rockford football alum, please send any stories/info to webmaster@rockfordfootball.com
Andy Albrecht (former all-area and all-conference Rockford QB from 1994-1995) named head coach of Illinois high school team. 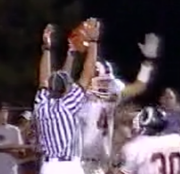 Bryan Anderson - standout at Rockford and CMU.
My name is Jon Bacarella and I was one of the co-captains on the 1996-1997 Rockford team.  I have been a teacher at Pakuranga College in Auckland, New Zealand since January 2007. I am currently living in Auckland, New Zealand and coaching rugby at Pakuranga  College.  There is constant talk and interest in a football team here at the college, and if we are able to get some sponsorship and competition, one may be formed in the coming years. 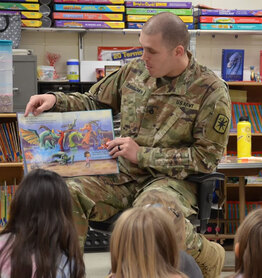 Ian Bartholomew
Sargent Ian Bartholomew is an MP at Fort Lenard Wood Missouri, he is going on to training in Army Computer Security.
Pictured he is volunteering in an army program to read in public schools. Thank you to Rockford Public Schools and coach Munger.. 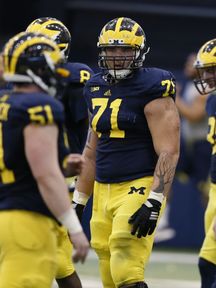 After a stellar career as a four year starter and team captain with multiple academic and athletic recognitions, Zach Breen moves on from GVSU to the University of Michigan Dental School after which he has had the distinct honor of being commissioned as an officer by the U.S. Navy, addressing the dental needs of our service men and women on navel bases around the world. This commitment is for the next eight years.Good luck and salute to our future Dr. Zachary Breen.You continue to make Ram Nation proud. RAM PRIDE!! 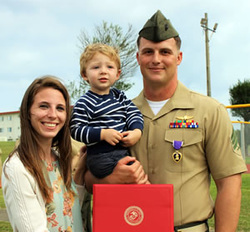 Joe DeBlaay finished his football career when he graduated from Rockford in 2007. During his time as a Rockford Ram, he was part of three championship games, helping to claim the title in 2005 and the runner-up title in 2006. He played on offensive, defensive and special teams. His senior year, Joe was named All-Conference Offensive Lineman. After high school, Joe joined the U.S. Marine Corps where he has proven himself to be among the best by joining the most elite unit in the Corps. Continuing to receive recognition for his outstanding leadership and service, Joe recently was awarded the Purple Heart for his heroism during his deployment to Afghanistan when the vehicle he was riding in hit an IED and was blown up. Even though he currently resides in Okinawa, Japan with his high school sweetheart and son and has traveled to over 11 countries, Joe will always consider Rockford home. GO RAMS!!! 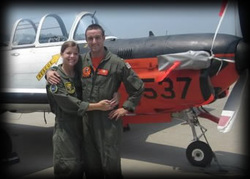 Chris Duke played football as a halfback. Chris excelled as a student and played several sports as football was his favorite. Chris also was high in his academics. After graduation, Chris went on to Embry Riddle Aeronautical University in Daytona Beach Fl. Where he again graduated high in his class with a 4 year degree in Aeronautical degree in as a pilot. Chris did a 4 year degree in 2 ½ years taking 18-22 credits a semester. He went in to college with one year of AP classes. After graduating from Embry Riddle in Dec. of 2009, Chris returned to Rockford and worked waiting to start his OCS (Officer Candidate school) training with the U.S. Navy. In August of 2010 Chris went to Newport R.I. for a 3 month officer boot camp. Chris graduated in Dec. of 2010 as a commission Officer in the Navy with the orders to go to flight school in Pensacola Fl. This is a 2 year school which his has passed the sole flight portion and will be assigned a plane Thursday 09/22/11 and then finds out which base he will be stationed for the last half of his training. Then Chris will have 4 years of active duty after that. During all of this Chris got married 09/09/2011 in Pensacola. Fl. Chris loves the Rams and orange/black happens to be his plane's color.

Adam Kieft - standout at Rockford, CMU, and played in the NFL for the Bengals

Spencer Klukowski (led Rams to 1st state championship), 3 year starter at Northwood University.
Adam Lewis 2003 Nose Guard & Special Teams - Freshman Head Football Coach Mt. Pleasant High School (2nd Year 2008-09)
Dan Marshall, 2003 Rockford graduate, starting for Northwood University's offensive line; may have shot at the NFL.
2010 graduate, Josh Pribble, started at Middle Linebacker in the GLIAC at Tiffin University. Josh was a co-captain for the 2009 Rams.
Roger Radeck (class of 1978) played nose guard for Iowa State and was drafted by the Detroit Lions; he was sidelined by a back injury; currently he is now working in Business as Director of Sales with Sprint Communications in Cincinnati, OH.

Nate Sanders (Rams running back, 2009-10) rebounded from his senior year ending injury to play college ball at Olivet College, in Olivet MI in the fall of 2011. He has since transferred to GRCC and also put his football talents to work on the Varsity Coaching staff at Grand Rapids Christian High School.

Jacob Scott (Moose) nose tackle for the 98 Rams graduated with his M.D. from M.S.U.'s College of human medicine. Dr. Moose and His wife, Dr Katie, will be serving their residency at the Mayo Clinic in Rochester, Minnesota. 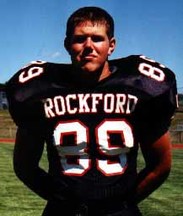 ​Tyler Sellhorn played tight end on the 1999 (District, Regional Champs) and 2000 (District Champs). He continued playing football at Taylor University in Upland, IN for four years and coached one season as a student assistant. He went on to coach one season at Chicago Hope Academy (IL) and Fort Wayne South Side High School (IN), and he is coaching his 3rd season coaching offensive line at Fort Wayne R. Nelson Snider High School (IN). He still receives text message updates from his father each Friday night on how the Rams are doing. He credits Coach Munger with developing an obsession with continuous fundamental improvement throughout a season. It shows every season come playoff time! GO RAMS! TBF! 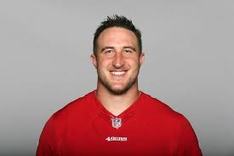 Joe Staley drafted by the 49ers in the first round and selected to the Pro Bowl multiple times.

2010 Graduate , Joe Stefanski played football at Ohio University
​Rod Stephan: Class of 1987; Division IA football – United States Air Force Academy 1988-1991, 3 Liberty Bowl appearances 1989-1990 as an outside linebacker; Semi-Pro Football – Dallas Knights (earned MVP recognition) 2002 as an outside linebacker.
....Currently serving in the USAF as a instructor/evaluator/test pilot while residing in Los Angeles, California [1600+ hours flying B-1 Bombers; 180+ combat flying hours (Afghanistan – OPERATION Enduring Freedom; Iraq – OPERATION Iraqi Freedom); Other aircraft flown include:  SGS 2-33A, T-41, T-37, T-38A, RQ-4A]
Chris VanderKuyl, a WR from the 1992 Rams, is a Physical Education and Health teacher at Hyde Park Academy on the south side of Chicago.  In 2007, he became the assistant varsity wrestling coach and helped lead the Thunderbirds to a 17-3 record in Chicago Public Schools Blue South division.  It was only the second year of having a wrestling program.

Aaron Westcott (#52) Aaron is off to a new venture. He will still be a blackhawk crewchief but he is now going into a new area of expertise. He will start his training in early February in KY and then will be relocated in Washington. His current rank is SGT( E-5). He often makes the comment that he still bleeds orange and black!! GO RAMS!!! He came back from a blown knee to play his senior year which ended up to be the first year Rockford has ever won the state championship (2004).  He was serving in the US Army stationed in Iraq as a Blackhawk Medovac Crewchief.

Keith Wurn - starred for Rockford in basketball and football; played basketball in college at Cornerstone University. He is among the few players to make it in the 1,000 point club at CU.